Who the hell does Google think you are?

Google promised us a vast, constantly updating directory of human knowledge and exchange. It promised to be our teacher, our personal assistant, our greatest confidante.

Stupidly, we thought this was for free.

Or maybe we still do: escaping the embarrassment of other people’s gaze when we search for solutions to awkward and intimate problems, medical symptoms and emotional stress. But though Google is not the “encyclopaedia at your fingertips” as promised—a bottomless but non-judgemental repository of knowledge—but rather a gigantic hoover, sucking out your personal secrets as you type them into that little square box. What you thought was a portal, what you treat like a dead-end, a one-way system, is actually a double-sided mirror. Your fetishes and fears are on file.

Google classifies your tastes and interests according to 2,042 categories. I learnt this at The Consulate of Google, an installation created by graphic designer Roos Groothuizen where you can receive your “Google passport” containing the advertising profile Google has constructed of you.

Apparently I like reggaeton (correct), dance and electronic music (yep) and Bollywood (sorry, nope). They think (they know) I am a woman aged between 25-34.

Groothuizen made the text on the passport smaller than the eye can see to reflect the difficulty of finding out what this ad profile says: Google does not publicise it terribly loudly. To read the profile, a digital microscope connected to a TV screen is available at the booth. 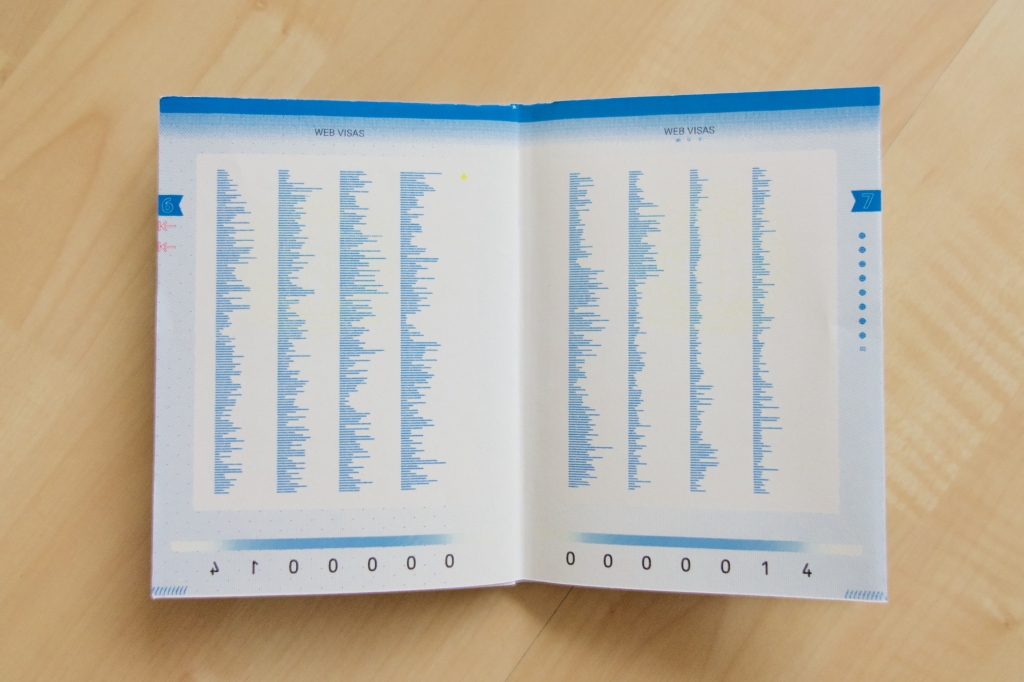 But while I thought going to the Consulate of Google would be like finding out as an East German that the Stasi had a big fat file full of details on your daily movements, conversations, meals, romantic partners, shopping habits and nighttime haunts… there was nothing of that sort. It was just a list of likes.

I was disappointed that there wasn’t more detail, more juice. I have given my life up to The Google — I outsource my memory and planning to their servers and access six out of the nine squares (mail/maps/search/drive/calendar/youtube) almost every day. If anyone knows me well, it’s Google.

But here’s the thing: Google’s ad profile of you is relatively thin (and sometimes inaccurate) because, well, it’s public. If it were any more detailed — based on the content of your emails rather than your YouTube history, for example — it may freak too many people out. They want you to access it, of course, to encourage you to refine their suggestions and tell them what they really should be advertising to you so that you’ll click on more of those sidebars and banners and make them some more money. No such thing as a free lunch.

But the real shit, the content of your racy conversations, the gossip you talk about your colleagues and boss, the family secrets, the STDs you googled — that’s still out there, in a data farm in the desert. The Consulate of Google is well-named; it’s like the Passport Office, a public-facing institution that politely legitimises you as a person without showing you into the real data mine that they – whether Google or the state – have on you.

Google’s data-hungry arms probe into every corner of our lives -— and we allow it to. Would we continue to do so if we really knew how much Google knows about us, and where that information may end up? Unfortunately, the majority of web users are still either unaware, or unduly bothered that they are being literally farmed by Google and its ilk. A “free” service, such as Google’s, is based on turning you into data which it can then sell. Where the data manifestation of you goes, or is viewed, or is sold, is not up to you.

It’s a devil’s deal, and one that I continue to make every day, because the alternative is too inconvenient to fathom. Without Google Maps, I doubt I would ever arrive on time. Without Google Calendar, I doubt I would make good on all of my commitments and there would be a lot more tedious back-and-forth between my friends, family and clients. A life without YouTube? Forget it.

But I’ve been feeling uneasy about things like this for a while, just unable to verbalise exactly what makes me uncomfortable, and why. When I hear about compulsory national ID numbers and cards I could only understand why they were dangerous for other people—maybe criminals, or tax evaders, or people with two lives, or a work history they’re not keen on a new employer knowing about. But me? I have nothing to hide.

That’s the phrase that sums up the counter-argument, the one favoured by pro-data lobbyists, the ones that want to blanket the world in sensors and who won’t stop until every word, action and thought is recorded. That’s the problem.

The other problem is that “I have nothing to hide” can only come from a place of privilege. You may have nothing to hide where you live right now, but you might do in another country where your sexual preference or feelings about the government are enough to land you in jail. You may also have something that you’ll need to hide in the future, should the government decide to criminalise or outlaw one or some of your activities, or should you be hired for a position upon which your previous life choices — or tweets — do not reflect well. You become inadvertently become the suspect of a crime. And then, anything you post is fair game.

I am a journalist. I know how it works. I have pored through the online histories of people I have written about and been amazed at the intimate trails they leave. I have traced estranged partners and sons, who left their own muddy footprints through the blogosphere and social media planets. It’s not hard; any idiot can do it. But even though I know how it works, it sends shivers down my spine to think of someone else doing it to me.

For example: I’m a fan of Ai No Corrida, that arty-hardcore Japanese movie. I’m sure the still I posted from it on Instagram could be used against me in court as proof of a sadistic bent. And we don’t know whether the things we do now will be criminal, or if we will ever be a suspect in a murder or rape or harassment case, and whether our online activity will be used against us — as it was against Amanda Knox, who was wrongly accused of murdering Meredith Kercher and who was profiled by the prosecution based on her MySpace page and updates on Facebook and YouTube.

The unnerving feeling we have that someone is spying on us when our calendar is filled in or we upload to the “cloud” (read: someone else’s computer) should not be brushed off and rationalised with “it’s fine, only machines are looking at this, it’s not as if a human is stalking you.”

Snowden’s revelations about the NSA and GCHQ showed us that government agencies were able to expand their mass and personalised surveillance only because tech firms enabled them to. Google’s ad profile is just the tip of the iceberg, as is Google itself. As computer security and privacy specialist Bruce Schneier says:

“This is not a question of malice in anybody’s heart, this is the way computers work… Fundamentally, surveillance is the business model of the Internet. The NSA didn’t wake up and say, ‘Let’s just spy on everybody’. They looked up and said, ‘Wow, corporations are spying on everybody. Let’s get ourselves a cut.’ “

But to be honest, when I got my Google passport, I had a long hard think about my web presence and what data I freely share and post. I changed my habits somewhat, but I’ve gone back to relative complacency in the meantime. I suspect that this is how most people behave. It’s a little like knowing that sugar and hydrogenated fats are good for you, but ohmygod donut. But it’s more than just desire: the way I use the web and internet services has transformed my life for the better, as I discovered when going iPhone-less and sticking to a feature phone for three months. The issue now is how to keep the benefits while dealing with the risks involved with all that data in the desert.