This article was originally published in the Asahi Shimbun. Due to a redesign of their English pages, it is no longer available (except from this snippet from the Wayback Machine). 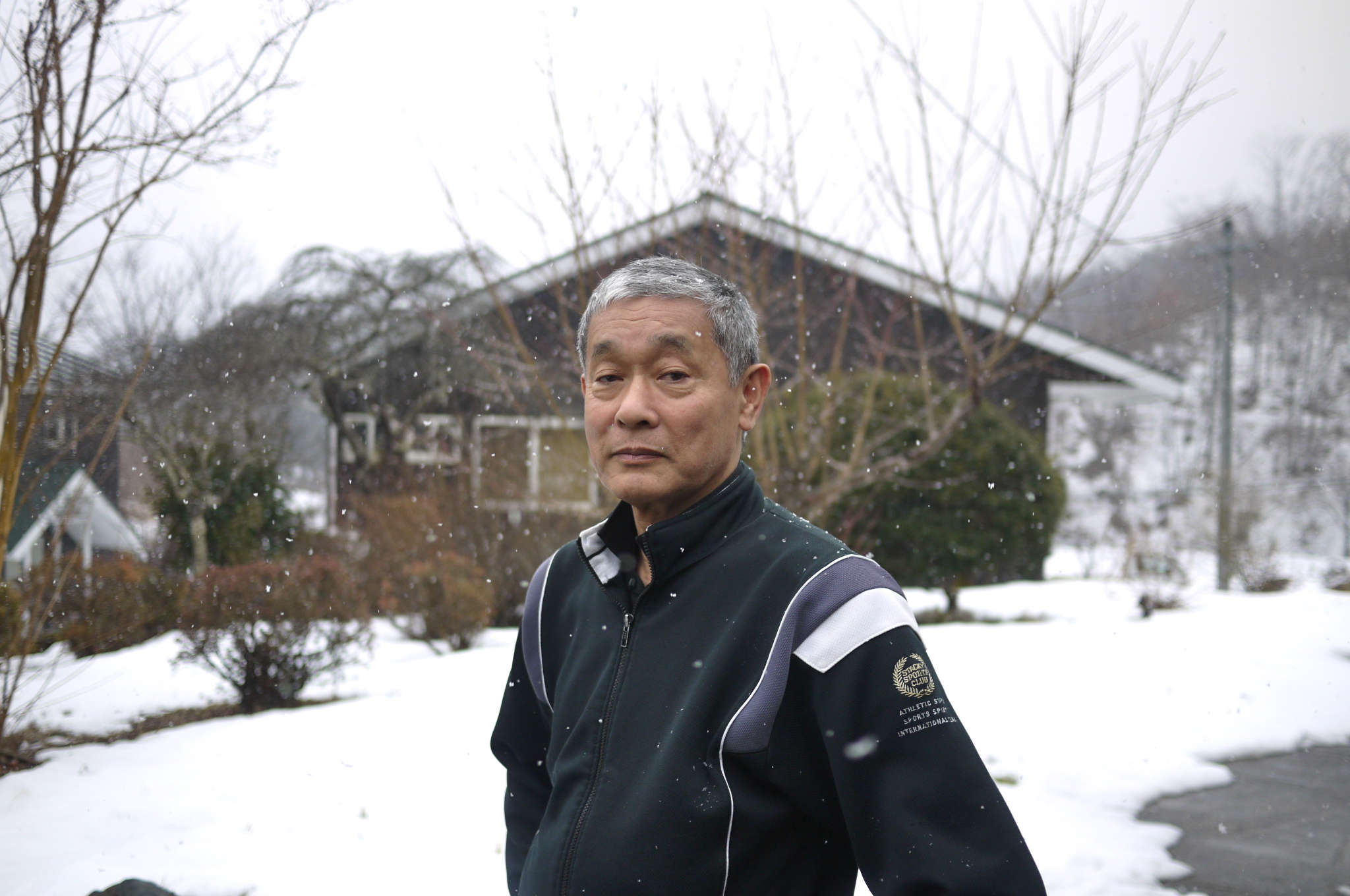 IITATE, Fukushima Prefecture — Nobuyoshi Ito is an unlikely renegade. The 68-year-old former systems engineer spends much of his time alone, working quietly at his computer in a remote farmhouse.

But Ito has disobeyed government orders to evacuate the heavily contaminated village of Iitate, Fukushima Prefecture, and has flaunted the ban on growing vegetables. He is now determined to prove that official radiation measurements are not only wrong, but that the government’s decontamination project is futile.

“Firstly, they’re doing it in the wrong order–first houses, then farms, then the forest–when it should be the other way around. Secondly, they will never bring levels down to the 1 millisievert it was before the disaster. Thirdly, that means young people won’t come back, and even if people start farming again, who would eat vegetables from here?”

Ito moved to Iitate in 2010 after his company, where he had worked for 20 years as a systems engineer, asked him to be the custodian of an agricultural retreat designed to educate its urban staff and visit schoolchildren about farming. His bosses also asked him to cultivate about nine hectares of land around the lodge. Having been long concerned about the use of pesticides and fertilizers in Japanese farming, he jumped at the opportunity.

Before March last year, Iitate was a haven for organic farming and its renowned cattle breed. It was also known as one of Japan’s most beautiful villages. Ito and his visiting colleagues planted rice, potatoes and a variety of vegetables using as few chemicals as possible, weeding by hand, with the intention of going fully organic the following year. He reaped a bumper harvest — which he puts down to “beginner’s luck” — and settled in for the winter.

When spring rolled around, heralding the beginning of planting season, disaster struck. His idyllic new life was shattered by the nuclear crisis that erupted at the Fukushima No. 1 nuclear power plant, about 35 kilometers away, on March 11. Iitate was particularly unfortunate as wind swept the radioactive plume released from the crippled reactors directly toward the village. As it passed overhead on March 15, it rained, pelting radioactive particles onto fields, forests and valleys, “fixing” them into the ground.

The residents, thinking that the wind was blowing in an easterly direction, away from the plant, were exposed to high levels of radiation–something that Ito says was entirely avoidable, had the government released so-called “SPEEDI” data, or a projection of where radiation would concentrate depending on wind and rain patterns.

Although the data was handed to the U.S. military on March 14, it took until March 23 for the Japanese government to reveal it to the public. Ito says this is just one example of the state’s “poor crisis management”–as was the government waiting until April 22 to order the villagers to evacuate, and allowing some children to stay until June.

“Their handling of the situation has been terrible,” he says. “The U.S. said immediately after the accident that the evacuation zone should be 80 kilometers. Japan didn’t. First it was 3 km, then 5, 20, 30. They gradually increased it … the other thing is that they didn’t distribute iodine tablets to children in some areas. The response was very uneven.”

It never occurred to Ito to evacuate, although he took a short trip back to his hometown in Niigata. Now he is one of just 13 people who remain in Iitate, which had a population of more than 5,000 before the accident. According to his measurements, radiation in the air hovers around 0.3 microsieverts per hour, although in some places it can reach up to 5 microsieverts. The international urban average is 0.2 microsieverts per hour.

Ito was curious to see exactly how much radiation would be absorbed in rice and vegetables if he planted them in Iitate. As soon as the snow and frost had melted, he planted sample batches of rice, cabbage, radish, corn and other vegetables in the contaminated fields and contacted several universities to see if they would help him measure levels once the crops were harvested. All refused.

“So I decided to just do it myself,” he says, explaining that he sends samples to a laboratory in Shizuoka Prefecture to be tested.

Many crops were found to have high levels — up to 6,790 becquerels per kilo in one batch of rice — but Ito’s experiments also threw up some surprising results. Rice planted in a field with high levels of contamination ended up having a lower concentration of radiation than rice from soil with a lower level of contamination. The same phenomenon occurred with vegetables, suggesting that the correlation between soil and crop contamination is too weak to make accurate predictions based on soil analysis. For example, potatoes grown in soil with 25,500 becquerels per kilogram of cesium only had 34 bq/kg once picked.

Many people planted sunflowers last spring after hearing they had been used to remove radiation from the soil in Chernobyl in the former USSR, when the nuclear accident occurred there in 1986. The Japanese agriculture ministry, however, announced in September that sunflowers absorbed little to no radiation. Ito disagrees, saying that the official study was poorly carried out. His own experiments also showed that the flowers absorbed relatively little cesium — just 82 bq/kgm — but the roots sucked up 7,060 bq/kg. He believes that the government wants to promote its own costly decontamination projects instead of allowing citizens to decontaminate their towns naturally.

The fruits of Ito’s experiments are scattered around the lodge–large jars of honey (1,700 bq/kg), brown rice hulls in a petri dish (up to 6,790 bq/kg), and some dried plants. Although he buys most of his food from the supermarket, he isn’t averse to eating a little of the food he produces, just as he doesn’t mind living in a house where the gutters send the Geiger counter soaring to 350 microsieverts per hour.

However, children are much more vulnerable, according to Ito, because they are still growing, and therefore any cell damage from radiation will replicate much faster and wider than in adults.

“We’ll be old in 20 or 30 years, but these kids will be in the prime of life. We should try to avoid that, and that’s why they shouldn’t have been exposed,” he says.

Ito is concerned that the government’s strategy for dealing with the radiation–wide-scale decontamination of the affected area–is illogical and a waste of money. After all, he argues, how can they clean the forests, the trees and the rivers?

“Saying you can remove just 5 centimeters of topsoil and it will be fine is such an amateur thing to say. Take wild boars, for example. They dig into the dirt for worms–which are really contaminated, by the way–churning it all up. There’s no such thing as ‘the top 5 centimeters’ for pigs. That’s just an academic measurement for pencil-pushers in Nagatacho and Kasumigaseki,” he says, referring to Japan’s administrative center.

He is also concerned that the local government is trying to play down radiation levels in the village in a bid to encourage people to return. According to his regular measurements, someone working outdoors on a farm for eight hours a day would receive 29 millisieverts a year of radiation, well over the international average of 1 millisievert. Ito says the soil has been removed near the town hall’s monitoring post, used for official figures on radiation levels in the town. Before it was removed, the monitor showed levels that were a third or half of what Ito was measuring. Now they are more than 10 times lower.

The larger problem, according to Ito, is that the government is keeping the evacuees in limbo with promises that they will be able to return home. He argues that even if they were to return and begin farming again, no one would buy their produce and they would not be able to earn an income.

“Many people who were evacuated are asking for 1 billion yen in compensation to be able to move elsewhere,” he says, adding that the exact amount would have to be negotiated.

“What I really want to say is that the tragic situation that has befallen Iitate could have happened anywhere… it’s not just Iitate’s problem. The danger is always there,” Ito says, referring to the possibility of another nuclear plant melting down. “Sooner or later, it will happen again.”