I never thought I’d see a happy marriage between two of my most disparate interests: electronic music and animal husbandry.

But if anyone was to do it, it’s Matthew Herbert, a man who has made entire albums out of the sound of crumpling coke cans, stomach rumblings and torn newspapers. According to his manifesto, he rejects drum machines and any recorded music that already exists, building everything out of samples of his immediate surroundings, or else live instruments. For the album “Bodily Functions,” he recorded yawns, coughs, fingernails across skin, and all the other infinitesimal sounds that human bodies make, and then formed beats, loops and melodies out of them.

He’s currently touring “One Pig,” an aural landscape composed of sounds recorded throughout a pig’s life, from birth to plate. The idea intrigued me. Would it just be snuffles and grunts? Would there be a plaintive trumpet, stolen from his Big Band days, mourning some swine executions? Or would it be a barbed political comment on the evils of factory farming?

Whichever it was to be, he raised the ire of PETA. Herbert’s retort to their complaint was typically eloquent and well-judged:

“The farmer cares deeply for the wellbeing of the animals on his small farm, and members of the community can spend time with the animals by appointment… It seems utterly absurd to me that PETA’s knee jerk reaction is to chastise me in public about the integrity of that process of enquiry without even bothering to ask me about the motivation or history of the project. In an otherwise distant and anonymous food chain, this one pig’s life has been clearly and respectfully acknowledged …”

In fact, it’s a surprise to learn that the recordings were not taken at an industrial feedlot, as the squalls and grating beats are pretty dark. They don’t quite conjure up images of happy piglets frolicking in a field.

As the lights come up at the beginning of the show, a “pigpen” made of microphone stands and orange wires becomes visible. A man walks onto the stage with a bale of hay, scrunches it up in front of a microphone, and then tosses it into the pen. As the recording of that sound begins to loop, four other men—including Herbert—come onto the stage and don white coats. They look endearingly nerdy and English, like a troop of physics students from Durham.

Herbert stands in front of the microphone and exhales deeply, before snorting a few times like an exhausted sow. The loop of snorts joins a growing cacophony of sound now rising up from an electric drum kit, a keyboard and various other sound boxes on stage. 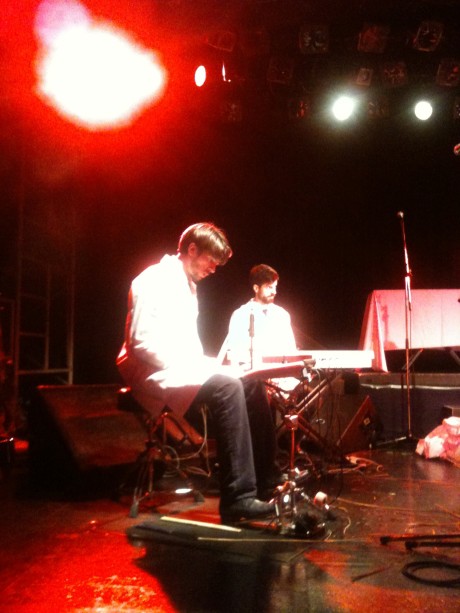 One man then entered the pen, turning around to show us the “OCT” written on the back of his coat. The pig is born in autumn. He paws at the wires of the pen, creating and distorting the aural patterns.

There are snuffles, squeaks and whines. Discernable, danceable beats are present, but it’s hard to distinguish where songs begin and end. Some are funky, others meld into house-like rhythms. Something that sounds like a voice emerges, wraps itself around the beats, then disappears. When the wires are stretched and snapped, the sound behaves accordingly.

The sound shifts and warps as the ‘pig’ changes into different white coats- NOV and DEC, before finally JAN. The discordant rumbles grow stronger—this is the slaughter—and the five of them all enter the ring, pulling at the wires as if playing with the fabric of the universe. An ungodly blur of sound erupts. And then all is quiet: nothing but snuffling noises again.

The pig takes off his white coat, revealing a red one underneath. There is a plopping sound. Drops of blood. The pig stands at the microphone with a hacksaw and a small dried bone, sawing through it squeakily.

The comic touch comes when a Japanese chef appears at the back of the stage to cook up some bacon on a portable stove. A porky aroma fills the room as he doles out rice and some kind of pepper relish onto plates as the band plays on.

Finally, the slaughter over, the five gather together before bowing and walking off stage. Herbert comes back for a solo performance in the pen, clawing at the wires as if possessed. He breaks one and then drops them all, but the music continues. It’s not clear if this is intentional or not- perhaps all the sounds were programmed and the influence of the wires was an elaborate illusion—but a band mate comes on, laughing, to press stop on the MacBook, and the two leave the stage together.

The entire show was more performance art than gig, although perhaps that is just indicative of the growing overlap between the two disciplines. Last year in Barcelona I saw an exhibition in which dozens of sparrows flew around a room filled with amplified drums, cymbals and electric guitars, striking notes and making unexpected chords every time they simultaneously landed on different instruments. The concept stressed the fact that sound is merely the result of displaced air particles, meaning that any interference in one’s environment can result in sounds—and yes,  music.

Herbert’s show does precisely the same thing. Rather than just let the sound flood out of square grey boxes, he forms it out of physical interactions. The pigpen is not just part of the stage show, like Daft Punk’s pyramid or a boyband’s fireworks, but rather an integral part of the music-making process. Herbert deconstructs music in a way that alerts you to the actual nature of sound: a beat is nothing but a clipped sound on repeat; vocals are nothing but sustained notes, and artificial sounds can capture sounds from nature better than instruments can. It’s curious to some that the more “technological” music becomes, the closer it sounds to nature—what mimics a mother’s heartbeat from inside the womb better, ambient electronica or a violin?

However, he’s not just a soundsmith. Everything Herbert does is inherently political, from recording the sounds of a McDonald’s Happy Meal to ripping up a Daily Mail on stage. Yet it’s somewhat hard to ascertain whether the mood of “One Pig”—dark and industrial—is supposed to express Herbert’s views on the meat industry itself or not. That said, I’m pretty sure that they all gobbled down on the bacon and rice after the curtain went down.

One response to “Piglet to plate.”