My most recent article for the Asahi is a review of photographer Tsuneo Enari’s exhibition, “Japan and its Forgotten War,” at the Tokyo Metropolitan Museum of Photography in Ebisu, Tokyo. You can read it here. 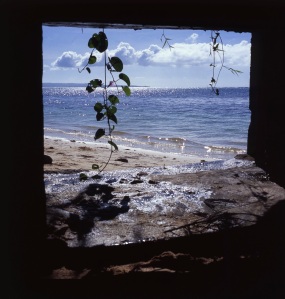 I was struck by the exhibition largely because I know very little about Japan’s role in World War II. I’m one of those people who despised history lessons at school and now regrets not paying more attention- although I went to a Catholic Girls School that mostly presented the past through the prism of the Church and probably didn’t touch on Japan at all. The problem is, as Alain de Botton says, “we imagine the past to be extremely foreign, and so we don’t use it as the supreme practical guide that it can be… [Ralph Waldo] Emerson suggested that we read history as a compendium of moral lessons.”

That’s certainly how Enari treats his subject. Within the last decade he has toured around the Pacific islands that the Japanese military occupied during the war, taking incongruously pretty photographs of battle-sites. He seems angry that Japanese people today are happy to visit islands like Saipan or Leyte in the Philippines without much reflection on what happened there over sixty years ago. 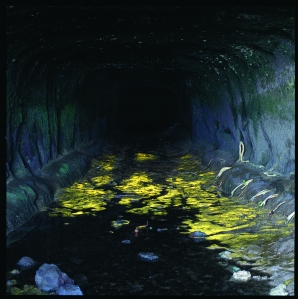 It’s difficult to record what has long since faded, rotted, or been erased. For many of the photographs, the text panels beside them do the talking: here, 330 Okinawan families and friends killed themselves to avoid death at the hands of the Americans; here, 10,000 Japanese soldiers starved to death; here, their blood stained the beaches.

The question is asks: until when should we remember? Is it wrong for young Japanese couples to take their honeymoon in Saipan, forgetting where their grandfathers or former generations died? Looking at the crystal white beaches, it’s hard to imagine them stained with blood, the air thick not with the smell of barbeques but of gunpowder, the excited shouts of the children diving in the swimming pool replaced by screams of injured men. But it’s something that Enari is at pains to evoke: one photograph, of an idyllic white sand beach, is titled “A Zero Fighter Crashed into the Sea,” and bears the caption: “Palau is now a South Seas resort area and a popular destination for Japanese tourists, but few are interested in the war.”

Many Europeans have reached a kind of “Second World War II fatigue”: weary of endlessly discussing the past, they argue that anti-German animosity no longer makes sense. But Japan is not Germany: it has never apologized for its military aggression in the rest of Asia, and until 2009, its leaders were still visiting the graves of Class-A war criminals at Yasukuni shrine. They have wiped the facts from its textbooks, and treated past aggression as an invention or exaggeration- believing that their current pacifism would absolve them even if it were true.

Enari is no less meek in his assessment:

“Sixty-sixty years after Japan’s defeat, Japan is a national of over-stuffed gluttons who have lost their morale and take human life too lightly. Thirty thousand a year kill themselves. This sickness in Japanese society is, I believe, a continuation of Japan’s refusal to acknowledge the crimes committed during the Showa wars and our unwillingness to speak frankly about them. We must reawaken a healthy awareness of our modern history and its implications.”

While I disagree that the high suicide rate correlates directly to the government’s failure to acknowledge Japan’s past crimes it is a rare stance for a Japanese person to take, and one that you will never see in Kasumigaseki (Tokyo’s version of Capitol Hill or Westminster).

For that reason, the exhibition is impressive, and brave. Korean politicians have been the latest to claim that Japan does not regret its military past; perhaps if they saw these photographs, they would realize that not all Japanese are ignorant of their country’s historical crimes. As it is, the bad blood that threatens to disrupt the placid surfaces of Enari’s photographs will continue to trouble inter-Asian relations for some time to come.